When I was first diagnosed with Bipolar, I was put on meds of course, and they sucked.  Bad. 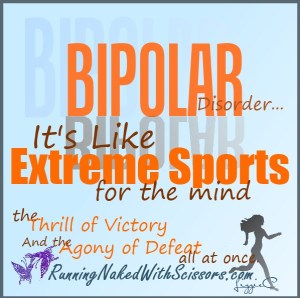 I have tried different ones here and there but have remained pretty much pharmaceutically medicated free.  I will admit that part of this was because the last couple years I had no insurance and the cost of meds was way too much for me to sustain on a monthly basis, but a big part of it too, was by choice.

I have a thing about thinking society is entirely over-medicated, seeing as how you can get a pill for just about anything these days and how so many people rely on popping a Xanax or Ativan or valium at the first little sign of anxiety.

God forbid they run out and have to deal on their own.

I sometimes joke that the real zombie apocalypse is coming in the form of the emotionally dead, over-medicated masses who walk around just not giving much of a f*** about anything because they can’t.

Deep feeling, strong emotions and anything that causes us to feel or think on a deep level, are avoided and pills take away all the pain, mental or physical, of living.  What used to be just the daily trappings of living, the ups and downs, stress and discomfort are now most likely considered dysfunctional and hey there is a pill for that and ever other thing too.

I could go into the comparison of pharmaceutical intervention to religion as a new way control the masses but that may come across as a little paranoid and not really the point today anyways.  So I won’t go there.

Do not mistake my opinion to be one of completely anti-medication, I am not.  For people with serious mental illness and dysfunction, the right meds can be life changing and may make the difference between functioning daily or not well at all. For those without mental illness there are situational experiences that medication can be helpful and situations where it is necessary, no doubt.

It is important though, at least it was for me, to not only know what I was being medicated for but how it affected me, how the meds were supposed to work, and to learn other coping skills besides the medications, before relying on medications to fix the problem.

After nearly 5 years without regular medication, I learned all kinds of coping skills, mostly I learned the ups and downs and ins and outs of being bipolar, how it affected me and I felt everything I did and thought, day in day out.

It was exhausting, but one thing I can say for sure is I felt alive.  Even in the dumps of depression, I felt alive and present..  sometimes painfully so, but for the most part, and with a lot of help from some people who love me just how I am,  I learned to muddle through.

I wanted to help others learn to live with their particular brand of mentalness,  alive and present.  I have learned through writing about and sharing my experience being bipolar, the life experiences of someone with bipolar disorder are not so different from the life experiences of someone without, with the exception of intensity no doubt.  If I could do it, maybe it would give hope to others.

Sure I was all over the place, sure I changed my mind from one day to the next, and finally even from morning to afternoon.  Sure  I had big plans and big dreams one minute that a minute later didn’t interest me anymore and changed to something else entirely, but I learned how to deal with even those things.

Yes, there were days I longed for relief in the form of a pill. As time went on, I found I could endure more before I felt that longing for relief but I also found that when I reached that point, it was at the point I exhausted every other coping skill I learned and could not stand the feel of my own skin anymore.

Studies have shown bipolar is a progressive disease.  The longer it goes untreated the harder it is to treat becoming more resistant to medication.  It affects cognitive function and people with bipolar have a life expectancy significantly less than the general population for some obvious and some not so obvious reasons.

I could site these studies if I had hours to go back and find them all but I am hoping you will just take my word for it that i have read them, seen them and even lived them.   I can attest to the fact it can get worse and it does get harder to manage without some kind of help.

Without going into a lot, or much of any, detail of how it finally was beyond any form of coping I knew, I finally gave in (gave up?) and went to the hospital in September.

I am back on meds.

The first week out of the hospital and on meds I was amazingly productive, energetic, happy and more than anything, relieved.

If I had written this the first week out of the hospital, I would have told you I was an idiot to have gone un-medicated so long. (which no matter how I feel at the moment is probably still true to a point.)

I would have recommended to anyone who asked, to get on meds right away.

I would have sworn meds saved me.

The first week out of the hospital I was manic and the meds had nothing, nothing at all, to do with me feeling so good, except the placebo effect and whatever tripped me into a manic state.  The big red flag should have been the sleeping pill that could have tranquilized a horse, did nothing for me, and I am not nearly the size of a horse.  Just saying.

Knowing I was on meds, stopped me from seeing the signs I had learned so well to pick up on, numbed me to the reality of what was really going on.   And all that before they even had a chance to kick in.

What goes up must come down, and down I came.  That too I attributed to the meds.  Weird logic but I am on meds so why wouldn’t it be the meds stopped working?  Again I missed the obvious.

I was at the point I wanted instant gratification, immediate relief, with no patience left,  I had waited, and tried and dealt, long enough.

It doesn’t work like that.  They take a while to kick in, a longer while to ascertain whether the particular cocktail is the right one and what the right doses are.

Where does that leave me now?  Still waiting.

My friend Red, (The M3 Blog) whom I affectionately refer to as the bipolar whisperer, once suggested to me that perhaps bipolar was how I coped with the world.  It made sense to me, so much so that I wonder if I have handicapped myself to some degree.

My  world has gone a little gray, the highs and lows are still there but not in the extreme and rapidly changing landscape of before.

I feel blah compared to before but not necessarily unhappy.

I miss the creative spurts and the fast flight of ideas, the need to create and express.  I miss writing and drawing and seeing everything in either bright and brilliant hues or deep dark shades of color.

It’s like learning to walk, or talk or breath all over again.

I am in a holding pattern of wait and see.  Wondering if this is how my life will be from now on, or if the next appointment I get a change in dose or type of med will propel me back to recognizing who I am and allow me to trust myself with other people and with what I want to do with my life again.

I am scared I have lost a vital part if myself, a common and often expressed feeling of those who are bipolar and learning to cope while medicated after being not, but willing to see if it is just a passing phase and it will all come back.

I am accustomed to passing phases and moving in and out of life changes, I think I can wait this one out although it is taking way too much time for my liking.

I am still not anti- medication, nor am I pro-medication although I am willing to admit, now that the medication had a chance to truly make a difference, there are good things about it.

This time I am committed to staying the course although I am not sure if it is the meds, or the fear of what I am told will happen if I just stop taking it after so many months.  Who cares why.  It is what it is.

Maybe because I realized this morning I forgot to order my refills in time and if I was going to stop taking them, since I am out for a day or so, now would be the time.

Or because I realized no matter how trapped I felt on the extreme roller coaster ride of bipolar sometimes, having to remember things like ordering refills on time keeps me trapped in the mundane existence I am in now all the time,  and I wanted to see if I could express that.

5 thoughts on “Revelations of the Medicinal Sort”