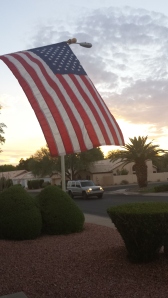 Yesterday was Patriot Day in remembrance of 9/11 and my kid’s school held an assembly to honor the veterans and those currently serving in the military.

Incidentally, the school is K-5 grade.  Not one of these kids honoring their flag, veteran’s and the victims of 9/11 was even alive when it happened. To them, it’s a history lesson.

It was quite an affair.  Relatives of kids, who served or are serving in the armed forces were recognized by walking across the stage with their associated child.

The kids have been practicing, Magpie was one of the narrators and Bubbsy’s class sang with the first graders.  It was a well thought out and well put on show but I have a few things that stuck in my craw about the attitude regarding the flag of the USA.   Some slightly cracked observations if you will.

They may be dead on and I may not be the only one who thinks so, making them less slightly cracked than I imagine, but I don’t typically single people out for assessment or ridicule unless I just don;t get it.

Not that I am planning on ridiculing anyone today, much anyways but here goes: 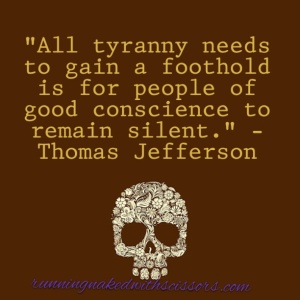 When I was a kid, we said the pledge of allegiance every day to begin class.  They still do as far as I know but I had to sign a consent form to allow my children to do so.

I am assuming (oh I know I shouldn;t but really) this may be so that the immigrants are not forced to do something that offends them as many of them are not even citizens or even speak the language that well.

That in itself astounds me, they live here and we are afraid of offending them?  Because why? They might go home?  Gee that would be a bummer.

We were also taught that during presentation of colors you stood, and remained quiet, in respect for a flag that stands for a country that enjoys freedoms most others do not and then to put your hand over your heart while singing the Star Spangled Banner.

A side thought here, How many of you know the lyrics of the Star Spangled Banner without singing them?  It’s a tough thing to do.  Try it. I was asked once as a tie breaker in a soldier of the month board to speak or sing the lyrics, and I had to sing because trying to speak them I could not think of them.  Just a little challenge for you, maybe it’s just me but apparently it’s not.

Anyways, this respect to our flag and country was taught and modeled by the adults and not questioned.  If anyone was offended, well, don’t say it.

It’s part of living in America, you have the freedom to choose.

We however learned it, everyone (generalization based on my observations and memories of that time) said it and did what they were supposed to during the national anthem and by doing so, learned what the flag stood for and how to show respect for what it stands for.

Now I have to sign a consent form?  Really?

What if I didn’t consent?  Nevermind speculating on that.  I not only consented but insisted my kids recite it three times a day.

I am a little curious about what would have happened if when the colors were presented, we had been asked to stand and recite the pledge.  A riot?  Geez.

The colors were presented by the Chandler High School Jr. ROTC Color Guard, who began marching into the room and people started standing and the teachers signaled the children who were seated on the floor in front of the assembly, to stand as well.  You would have thought it was social hour and the flags made it all the way to the stage before the hub bub died.

Need I really say anything?

Ok something, kids will be kids and of course, a few can be expected to act out but it was out of the realm of a few and completely detached from what was going on.

The music for the Star Spangled Banner began and most everybody dutifully put their hand over their heart and faced the flag and sang.

Except the guy next to me who stood there sullen and quiet with his arms crossed over his chest.

I wanted to smack him

Is this some disgruntled citizen whom mistakes patriotism for support of current policy and politics, probably.  Don;t get me started on that again

However, I see how because we live in this country and have freedoms to express ourselves as we wish we can choose to disrespect the flag symbolizing everything we have and are about.

Go ahead sir, show your ignorance and complete utter idiocy.  Be thankful you can and at least uncross your damn arms.  Don’t be a douche.

The rest of the show went well, the kids did great and the 4th graders closed with Lee Greenwood’s “Proud to be an American”

And I am proud.

We were also there to remember those who died in 9/11, all of them.

Magpie and the Marine Dog 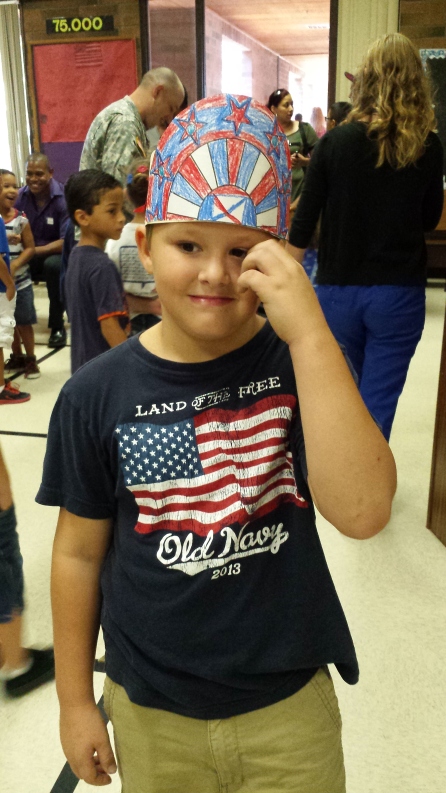