When I was a little girl, I traveled quite a bit more than in recent years, lucky enough to go to England at 10 or 11 to visit my aunt, uncle and cousins.

Times were different back then,  as many of us know, and my parents put my brother and I on a transatlantic flight, alone, that summer to give us the chance to experience the world.

We spent a few weeks in England. Then in a station wagon, my aunt, uncle and five of us kids ( between 12 & 5) went gallivanting around Europe.

Crazy I’m sure, (on my aunt and uncle’s part ) but it was magnificent.

In preparing to visit other countries, I remember how we were instructed not to be ugly Americans.  Americans apparently were viewed as obstreperous egomaniacs because many assumed, as taught,  America was the greatest country in the world and who wouldn’t want to live here, and of course everyone speaks English right?

Not being an “ugly American” simply means to respect the culture and diversity of the foreign countries we visited, to not belittle their practices and to make an effort with even the simplest phrases to try to speak the language.

Seems fair enough and even though it really was lost on me, the real reasons behind the muting of patriotism, (or why anyone would be offended by my proclamation of being a citizen of the United States,) I found it quite a rewarding experience, in the countries I traveled to, was stationed in and lived in through the ensuing years, to be open minded and adaptable to the particular countries culture and ways.

To not be an ugly American.

I am not one to get all political, and before I go further, I only want to make that point because it seems anytime we want to talk about what is going on in these troubled times in America it is misconstrued as political.  There is a different between politics and patriotism, we can still love our country and have great pride in this nation, even if we are not happy with where it is going at the moment.

I am sickened by how people of this great country have demeaned and degraded the privilege of being American by first; criticizing the government as a separate entity from we the people, then confusing disgust with what the now separate entity of power  (given only that power by the Peoples misunderstanding of their own), with lack of pride, love and support for the entire American Nation.

Disgusted how people lay blame, point fingers and separate themselves from the government, forgetting that we the people are the government and the only reason they get away with the crap of late, is because we the people do nothing to stop the government that is supposedly by the people and for the people..to serve and protect us not lay down the law for us, nor tax us unfairly, nor take away the rights and privileges afforded us  from a place on high we can not touch, nor have control over.

Police are public servants..they serve and protect the people, they are not meant to hound us, ask us for papers, and facilitate the unconstitutional step by step repeal of our freedoms. Politicians, judges etc are elected officials, given their place by the people, to work for the people.

We the people, as a whole, have only ourselves to blame for the now clear separation of the government from the people and have ourselves given the government the power to completely steam roll us because most of the people …forgot this little fact about being an American.

Back to the ugly American.

In learning this ideal of open-mindedness, tolerance for the cultures and ways of other countries, I am quite tolerant of people who come to reside in America who hold onto their previous ways of their heritage, thinking live and let live and we are all Americans and that’s the other beauty of this country. The melting pot.

I realize I am of a minority who can live and let live. The majority get an idea in their heads and feel since most people are doing it, everybody should be doing it (ergo majority) and like sheep, we should all fall into line with whatever, yet fail to realize that sheep need herding and the power is with the herder..which is now it seems the government or social media, or the village idiot. 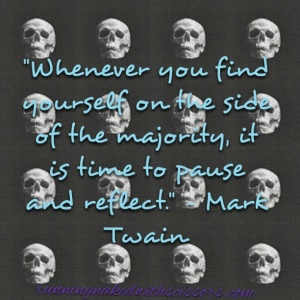 I do not like that immigrants come here and refuse to learn the language and integrate with the American way but reading some of the, to me ugly to America, events of late, I suppose I can not blame them as we seem to accommodate their every need and whine, kissing their proverbial ass in the name of political correctness.

In other words somewhere along the way, expecting others who come to this country and call it home to be open-minded tolerant and cooperative with our culture and customs, for example, learning the language maybe,  is now considered offensive and those who believe it should be so, to be the ugly Americans.

Last May school officials in a California school banned the wearing of patriotic apparel, i.e shirts depicting flags and other patriotic things, thereby restricting the rights of students for free expression, on Cinco de Mayo,  to not upset the Latino students and possibly have the flag of the country we all reside in incite violence.

It gets better because the Federal Court of appeals, upheld the ban.

Recently students of a school in Colorado wanted to include a day honoring America in its Winter Spirit Week and were denied on the grounds that it might be offensive to some.

Incidentally, the students protested and the school board reversed its decision.

Those students had the right idea and hit the nail on the head of not allowing the authorities to bully them, restrict their freedoms and reminded us, I should hope, even on a small scale, the power of the people.

Politically Correct ass kissing is ugly. The level of accommodation afforded those who aren’t even born here and refuse to recognize, nevermind have a bit  of respect for the flag of this great country is ugly.

The fact the rights to free speech and freedom of expression of American citizens are being slowly squelched,  as we point fingers and lay blame elsewhere so as not to be accountable for our own fate, is grotesquely ugly.

The fact its being done to not offend immigrants, many not even here legally and to let them have more freedoms, like the freedom to celebrate a holiday of their home country openly and even embraced by Americans, while we pretend we aren’t on supposed to be patriotic.. disgusts me.

I love America, I respect the flag, the foundation, and I am proud to be an American. This is my home soil and I don’t give a monkeys butt if that offends anyone at anytime. If you aren’t proud to be in this country, taking advantage of our privileges, go home.

If the site of my flag makes you mad. GO HOME.

But again how can I blame you when you are only taking the inch we give, even is it is for a country mile.

The problem is more with what’s going on here than what you take advantage of.

How about to the politicians that think we shouldn’t offend anyone on home soil, even if it infringes on the rights of the citizens of this country, or think we should apologize or bow down to, or kiss anyone’s ass? You were put there by the people with the privilege  to vote, not the ones who you coddle and bow to.

If we collectively pull our heads out of our asses before it is too late, you won’t be there long.

Ugly American?  How about Angry!?

Wake the F*ck up America.
We are the people we have the power.
Be American.

Posted from the teeny tiny keyboard of Samsung Galaxy S3.