Le’t’s blow it wide open shall we?  Ok I think I will. and if you don’t like it… well this is my world here and my  truth.  If someone feels it, who the hell is anybody to say it isn’t true.

Right is different.  Right has to be found. The feeling is true but what we assign it to may not be right.  Deep I know right?  yes..agree with me ..

The truth is something we value as a people.

Honesty is seen as a the standard we strive to achieve.

Except we just don’t want to admit we are liars and so we tell people we are honest.

How many people who are honest go around telling people they are honest as a quality they possess every time they are asked to tell us who you are?

I’m going to go with, only the ones who have been made aware of the fact there are people who would lie about things stupid to lie about, usually in ways that have surprised hurt or shocked them to the point of realizing they never assumed the dude was lying about his age…just that they look older than they say.

I mean ..if you can’t conceive it you don’t take the badge of one who wouldn’t do it..

Honesty is a quality, a trai,t a standard, inherent and expected mostly, and those who live with honestly, integrity and have excellent character, until they have cause to find out otherwise, assume everyone else does too.  Huh…so why have to say we are honest?

Why have to tell someone trust me?

Why have to convince anyone we are what we say we are?

We are all liars and we lie the most to ourselves.  Until we stop.  Funny though when we stop lying to ourselves, we stop accepting others lies about themselves and are more often the ones calling bullshit and trying to say why…  it’s just no one really wants to have to admit they are a liar.  Like that makes them a piece of shit right there.

Who decided that without really looking at how our nature is?

Probably the Catholic Church..or some church,or kind of smart actually person who wanted to control a large group of people and the ones who gain the most by creating an opening to shame people into doing what they want them to.  My opinion but I didn’t just come up with it…

Some see the big picture. Some by trying to improve their lives and themselves ..realize they are liars.  Some figure it out when they start  to wonder why certain things set them off so bad that they can be guaranteed to be extremely upset by being called something they do not think they are.

They who protest too much to the things presented to them as what they do, are the ones who maybe should take a look at themselves and see why they are so pissed off.

Oh yea I know, some people are not what they are assumed and the problem is the assumption is wrong. not the persons self-awareness.  That comes to play with the condemnation of a group of people – the lumping together because the majority of them are.

The wrongness comes from the majority that makes the standards of the whole acceptable, being accepted then, as the only way it is, and then, even as we watch the purple person eat the pink jelly bean, deny that they are still purple people and insist something is wrong with them.

What is wrong with people.

Besides we are all liars? Or have been, or think we never COULD lie.

I will give you a perfect example.

Well isn’t that how we figure a lot of life’s stupidity and shit out?  By having some sort of aha moment that says

If you are able to realize the feeling of conflict and  admit you are defensive I mean.

You gotta be willing to be the poo on the street if that is what the truth is ..accept it and own it, then you realize you can change it and Yea.. I remember telling my parents a lie and getting caught.  Can I say for sure it was the first lie I ever told them?  No, it was getting caught that made such a huge impression on me that I saw the idiocy of lying from an early age and then chose to not do it.  Mostly.  And at the age I was, it wasn’t a choice it was a lesson learned and it stuck.

It is my first instinct to tell the truth.

The payoff was better than the outcome of lying.  I guess there are kids who got away with it a lot before getting caught and figured what they got away with was worth the one day of punishment.  Not literally making that choice but learning it.

Even to the point of dysfunctional honesty.  Oh boy ever heard of that one?   Pathological liars yes, but honesty that is so overly honest it causes disruption and dysfunction  for the person who suffers from it?

No, they don’t label that as a disorder, mental or otherwise.  It would be kind of funny to say that the person who goes beyond the standard we hold acceptable as being a good person… is dysfunctional.

Well I am here to tell you, it’s a lie.  There are people who are so honest they get all kinds of grief for it.

Its is to my knowledge a child like quality, children tell the truth as they see it until we teach them that the truth may hurt someone’s feelings.

Then we teach them to lie.  Now, it’s not put this way of course, usually its called manners and in theory, gone all wrong, it is not told them to change the truth but to word it in a nicer way.  Which is basically giving permission to lie to protect someone from the truth….

How about if the truth hurts change it.?

Who made the standards of lying acceptable?

The default state of human existence is according to standards of society.. unacceptable.

The only way we achieve the ideals we strive for is to understand why they are better and acknowledge we are not there yet.  And it takes work, anything worth having or being is not easy to everyone who wants it.

Some by nature are closer, in fact they are the ones who may be what the ones who weren’t, looked up to as their touchstone.

Others will never get close.

We are lazy and  everyone of us wants to believe we are that special one, that we have what it takes, that we are the models not the substandard slobs.

Until we have reason to wake the fuck up and see that not everyone can be the chief.. and our mommies told us we were cause in their eyes, we were the best but most kids mommies told them they were special..

We are all special.

But not for the reasons we tell ourselves.

We are special because we are here and we matter and we can be better and achieve great things but it requires honesty to get there, and the best way to know if you are real, not in denial, is to live with integrity – a sense of being whole.

If you are gong thought life thinking you are just fine the way you were when you left your parents house with no need to change what you do or question how you live or relate to others.. that you are already there without having to do one bit of inner inventory or feel any conflict.. you’re in denial.

That little feeling we get that knocks us out of a state of balance is the key.  When we are uncomfortable with what we are doing hearing or seeing, feeling conflicted about what we write, or continue to want to edit ourselves and something about something someone is telling us is not fitting into the picture… that one bit of information that can not be proved, or disproved, but the only way you can really fit it into the truth is by admitting it isn’t the truth, and instead of doing everything in our power to stop feeling uncomfortable (this is where addiction and self medicating, even maybe suicide may fit in)besides the one thing that works, the truth, we lie. 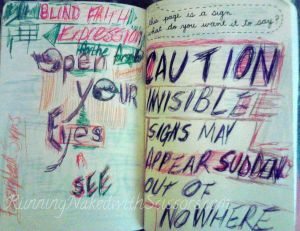 When I get the knot and feel conflicted, if I am paying attention and acknowledge it is there, I know it is telling me, whatever is going on is not inline with, what I have been told, what I thought I knew or how I feel about something.

If I sit here and write a bullshit post that is just stuff I am repeating and trying to relate, if I try to present it as my values and I don’t really believe it..or stand for it, I will not be able to find the words or I will go back over and over and over to change it.

If I keep wanting to change it, its not the truth.  that doesn’t make it a lie. it makes it denial maybe, or even something I don’t want to admit I don’t believe.

If I get muddled and unable to find the words to express what I am trying to, I am probably trying to say something different.   If I have the need to explain myself over and over, or edit and revisit what is coming out of my mouth or fingers and ending up as words, or feel like I said what I wanted to but then think well I could have made my point with.. this and then..how about ..oh yes, that, I need to think about what I am saying.  Again.

We are all liars.  We lie to each other,  we lie to ourselves, we lie and don’t even know we lie.

Unless we have realized the folly of our bullshit, decided to be aware, be better and live with Integrity.

There is the truth, at least how I know it.

Can you handle it?