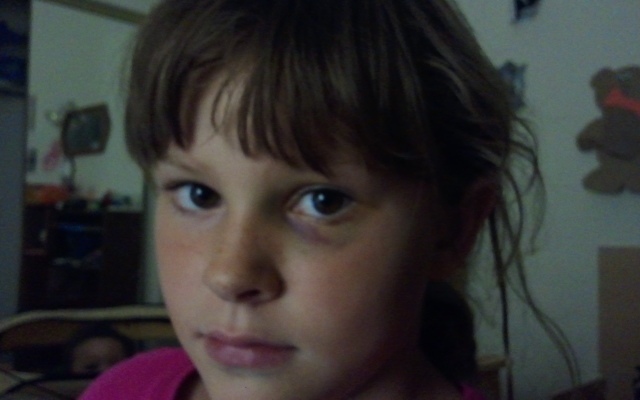 Magpie and I have a Mother Daughter Journal that has things in it for mothers and daughters to do together, which I guess is what you would expect from a mother daughter activity journal thingy right?

In many ways it is fun but in some a little uncomfortable.  I really didn’t want to tell her my most embarrassing moment from when I was her age. It was ….embarrassing.  But I did it and now we are on to the other things.

No I am not telling you.  No you can’t bribe her.

One of the other things is a fun jar full of activities and we pick a number and each pull that many and try to get them done during the day.  Things like name the clouds, and the one I got the other day was  – Pick a different name and use it all day.

So we picked names for each other and then 5 yo old Mr.C much to Magpie’s chagrin wanted also to change his name for the day to Bubbsy.  I had to say yes.  SO my little ones were now Bubbsy and Gracie.  Gracie was on the short list of names that I wanted to name her.  And it would have been fitting.

She wanted to call me Lizzie.  Really I mean that is my name, just not to her.  I am a little old fashioned like that and game or no, I refused to be Lizzie to my 8 and 5 yo be it for a minute a game or a whole day.  You just don;t call your mother by her first name unless you are introducing her.  It;s mom or some variation.

And so I was ..wait nevermind this is Gracie and Bubbsy;s story. 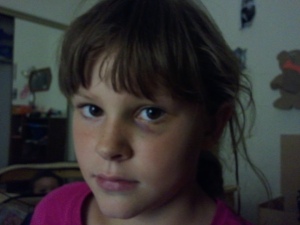 This really doesn’t do it justice but if you zoom you can get more of the colors and as a bonus if you look in the bottom left corner there is the little Monkey Man, my grandson, peeking up over the top of his play yard.

We all know it’s a play pen.  And normally I don;t give a monkey;s left …  um usually I don;t care about the whole pc game but lets not get anyone riled up today  – I am not equipped to deal with it at the moment.

So Gracie and Bubbsy had parent teacher conferences last week.  I know right?  Most of your kids just started or are getting ready to and mine are already a whole grading period into school.  It doesn’t seem like it though.

Parent -teacher conferences are not my favorite thing.  With my 11 yo son, they were really hard to get through and usually left me with an empty aching feeling and just hurting for my son.  I would like to take a brief  pause and tell you that my 11 yo, only missed one day of school last school year.

Whats the big deal about that?  Well, first of all I told him that I would get him something to mark this achievement when I see him again and he said he would have received something from the school except for that one day.

I don’t need perfection.  Improvement is worth rewarding and the previous year he had missed upwards of between 20 and 30 days.  So 1 day absent for him is amazing and I just wanted to tell you.  I am really super proud of him.

So Gracie and Bubbsy had two early release days to allow for conferences, and because they don’t have enough time off   🙄

Last year I only had Gracie to worry about as far as the whole conference thing  by the end of the year, so I have kind of warmed up to them.  Who wouldn’t be ok with going to school and hearing what a great kid their kid is.  Not even ok, almost excited.

I probably would have been already excited but I was a little trepidatious because Bubbsy started Kindergarten and although we had not one problem with him in  Preschool, it’s the boys who have always been the ones who have me questioning my mothering skills after the conferences.  Sometimes I question what I was even thinking .  Then I remember.  I wasn’t so much.

So Bubbsy was first and his teacher is a very nice lady.  I am in awe, not necessarily in a good way of the things they are expecting of kindergarteners these days.  He has more homework than I did in High School and he needs to work on the letter sounds. . They don’t care about the names anymore they want the kids to know the sounds.

The important part of the conference for me, because I already am aware that Bubbsy is quite bright, is about his behavior.  In short, he is a good kid.

Disorganized but wants to work and wants to learn to be organized.  He has a great sense of humor and even though he is having a problem with one of the kids in school, he doesn;t tattle on other kids.  He is a boy and he does boy things but…are you ready for this?  He is a good-hearted kid.  She can see that in him.

And it is true.  He is.  How often is it though that someone tells you your kid has a good heart?

Her teacher loves her, she is a great kid and very helpful.  Smart and funny and her  teacher believes in challenging the kids that are, like Gracie, able to grasp the concepts of 3rd grade easily by giving them harder work to keep them engaged.

YES!  That was my biggest problem in school, and I believe a bright kid who isn;t challenged is just as much in danger of failing as a kid who has learning disabilities and isn’t given help.

So Gracie and Bubbsy got glowing reports, they are both smart and funny and gosh darn it, people like them.  They make a mother proud.

At home they play well together making up stories and songs and its fun to listen to them interact.  There are times when Gracie thinks she could do well without Bubbsy but Bubbsy would be a bit lost without her.

They are a pair.  Just like Johnny and June,  Donnie and Marie, Scooby Doo and Shaggy,  Bonnie and Clyde, Goody Two Shoes and the Filthy Beast, ….

And I kinda like the new names.  Gracie and Bubbsy

4 thoughts on “Meet Gracie and Bubbsy, They are Quite a Pair”