A  possibility due to favorable combination of circumstances

I am intrigued by the weekly photo challenge.  At first I read the challenge of the week and I did not quite understand the concept.  Wish that I had participated in it, known about it earlier.  I would have rocked the last few weeks challenges.  And I almost passed this week because I was struggling to picture it.

But the opportunity presented itself and I am inspired.

There was a time I could look at him when he wasn’t aware of my gaze.  I preferred to study him this way even more than to photograph him.  I saw more than any photo could capture.  He doesn’t like to have his picture taken so much anyhow.  If someone photographed us together or him alone, unless they were quick about it, the result was someone I didn’t quite recognize.  Posed, inanimate, cold almost.  I have many pictures of him but only a few that I hold dear to me.  There is so much to learn about a person when you watch them and they are not aware of it.  I felt so much love, and desire.  He was just himself, no posturing because he had anything to prove.

I would watch him talking to other people. Or cooking or while we worked. I was always amazed at the strength in his hands while they were occupied and amused to be a voyeur to him winning someone over to his point of view without even hearing the conversation, these things so difficult if not impossible to capture in a still photograph.  I watched him while he slept and as often as I could be still enough myself to just absorb him.  I have many images of in my mind that are as sharp and clear as any photograph. 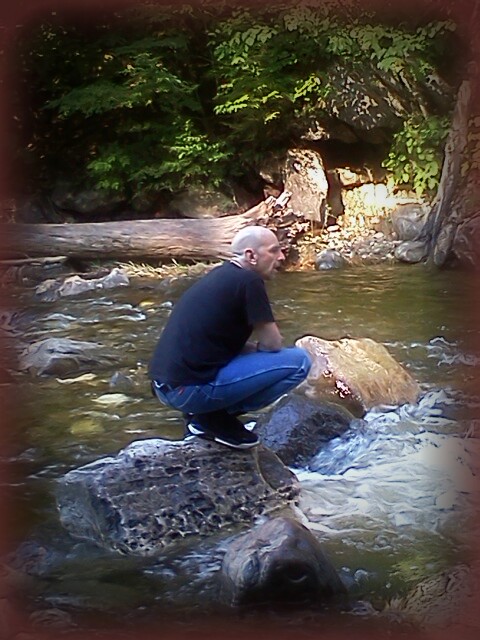 If I had known there would be a time I wouldn’t be able to  contemplate him when the whim struck me, that we would not be together, I am not sure if I ever would have believed it.  That was not the man I saw when I watched him.  And yet, that is where we have come to.  A place where I rarely see him, and never it seems unaware of my gaze.

And then this day, while showing me a place he loves, he was unaware, it seems, of my proximity, unaware of his guard being down  and me seeing once again a part of his soul.  And from that one moment, that chance, because of a favorable combination of circumstances which included me having my camera with me, I captured him the way that I used to see him all the time.

It was a chance, like our love, like our life together.  All of it, him, us; the opportunity of a lifetime.